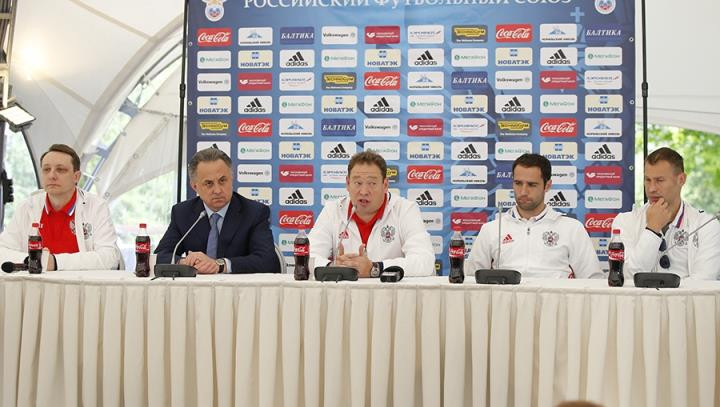 "The first task is to qualify from the group"

The news conference was devoted to the preparation for and further participation of the Russian National team in the UEFA EURO-2016 that will take place on 10 June – 10 July in France. Right after the event our team set off for a training camp to Switzerland.

- Mr. Mutko, which feelings do you have before the departure of the team for a training camp ahead to the UEFA EURO-2016? Which task has been set for the team at the forthcoming tournament?

Vitaly Mutko: As it always happens before the start of any major tournament I have mixed feelings – excitement, worry as well as expectation of a great football festival. The EURO is the main continental competition in which the best European teams take part. I am very pleased that Russia is among them. The global task of the Russian ntional team is to eliminate a problem of the qualification for such major tournaments as the EURO and World Cup. Speaking about the upcoming competition, the first task of our team is to qualify from the group and to proceed to the play-off stage. Further the tasks will change. We can take as a certain land mark the performance of the national team at the UEFA EURO-2008 where we set a historic benchmark. We would like to wish to the whole team and Leonid Slutski good luck! We hope that Russian supporters will enjoy the team performance at the UEFA EURO-2016 and will not be disappointed.

- Mr. Slutski, it is your first major tournament at the level of national teams. Do you feel that it is a new chapter in your career; are you ready for it?

- Mr. Mutko, a very important question. Do you have an assurance that the team will perform at the EURO-2016 free from prohibited medicine?

Vitaly Mutko: We have never had any problems with doping in the Russian football. We have taken about 2000 doping tests from players of different teams in the course of the year. We don’t have any problems with it in the national team. For example, I shall remind that FIFA anti-doping officers recently tested 10 Russian players in France.

- Do you have any concerns regarding safety and security at the UEFA EURO-2016 in France?

Vitaly Mutko: Providing safety and security at the tournament is the task of the host country. France has undertaken this responsibility. In our turn, our colleagues from the interior ministry have studied and examined all the routes of our team in France. We will take certain additional measures too. And, of course, we count for an efficient work of the local safety and security services in France.

Leonid Slutski: It is a painful loss for our team. But I am sure that we have players in the team who will be able to replace Alan efficiently. Though, of course, he is one of the key players.

- What do you think about the national teams of England and Wales that Russia has as opponents at the group stage?

Leonid Slutski: Regardless that these are two British teams they are completely different in their playing styles. It is clear that England is the favourite in our group. Wales is the team the performance of which mostly depends on Gareth Bale. We will have a tailor made preparation to each opponent; we will do our best to make use of our advantages and get a positive result.

- Which thoughts and feelings do you have ahead to the start of the preparation?

Vasili Berezutski: All our thoughts are about the national team now, about the work ahead. We have seen the preparation planning which includes along with physical trainings a lot of sessions on tactics. Now when we have more than two weeks before our opening match at the UEFA EURO-2016 we have time to communicate, to unite.

- At which position are you going to use Roman Neustädter?

Leonid Slutski: I think it’s not a secret that Roman can play a central defender or a midfielder. I didn’t plan to invent any new position for him. We have two weeks to decide at which of the mentioned positions he will be more useful for the team.