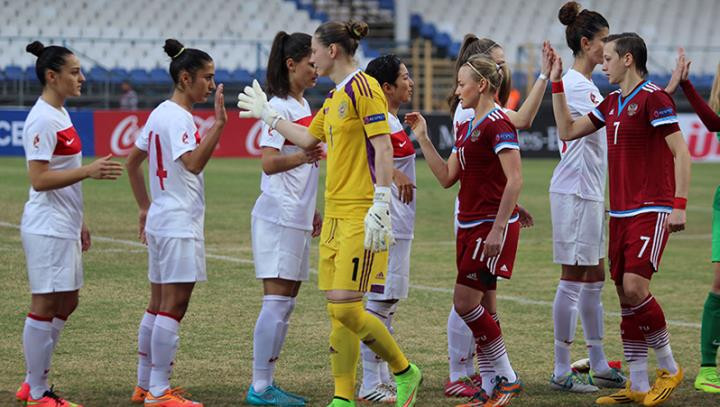 On Thursday, 2 June the Russian Women’s National team will play the UEFA Women’s EURO-2017 qualifying match against Turkey. The game will take place at the Arena Khimki stadium, Khimki, Moscow region. The kick-off is at 19:00 Moscow time.

Please follow the link to find the information on the media accreditation for the match.

The game will be broadcasted live by the Match TV channel.

Our team started the preparation to the game on Tuesday, 24 May. The squad headed by Elena Fomina arrived at the training base in Novogorsk for the training camp until the match day.

The coaching staff of the Russian side called the following players for the preparation to the game:

«On 24 May we settled at the training base in Novogorsk for the training camp and on Wednesday we start the training process. The main task of the coaching staff now is to bring the players in their best form to the upcoming game against Turkey in Khimki as well as to the away qualifier against Croatia on 6 June.  There were four rounds of the Russian Championship already played, the players are in their playing tonus already, now we have to revise what we require from them. We will focus on training fast attacks, pay more attention on completing goal scoring opportunities and playing interaction”, - noted Elena Fomina.