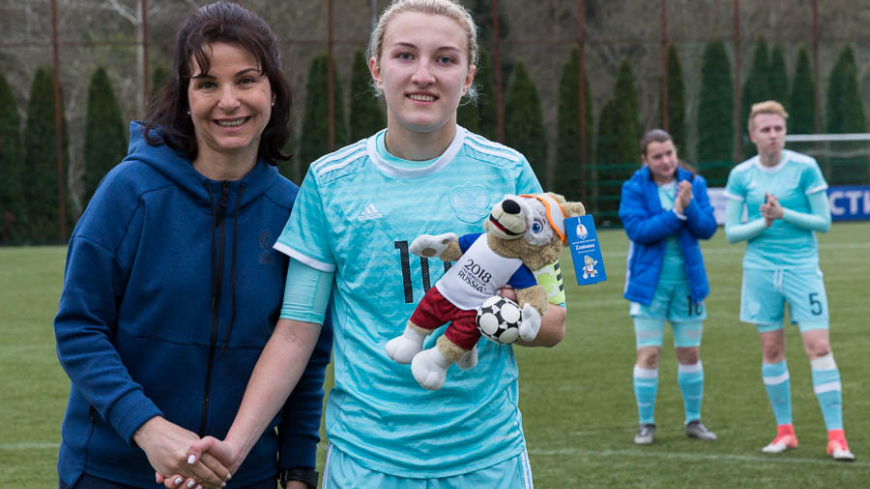 Our team played with complete dedication

A defender of women's youth national team of Russia Veronika Kuropatkina who scored a hat-trick and was named the best player of the match with Romania (6:1) in the second round of the international tournament "Kuban Spring" to memory of an honored coach of Russia Valentin Dmitrievich Grishin in Sochi, shared her impressions of the games with the FUR official website.

– This is not the first time I've played against Romania. This team is a good, organized, and they showed it in the first half. We started the meeting well, but there was not enough accuracy in completing the attacks. The Romanians, in their turn, jumped into occasion. Unpleasant moment with a ball bouncing into a hand of Lena Harlampus ended with a missed goal from the penalty spot. After that, we had two great moments to fix the situation, but unfortunately the ball hit the crossbar twice.

In the second half we went out to the field oriented to an early goal, and eventually we succeeded. Already in the first minute of the second half, I distinguished after an angular of Polina Organova. This ball really influenced the psychology of the team. The second goal of our national team was kicked by Lena Shesterneva, and then I scored again from the standard. The double was fulfilled by our captain Vika Dubova. And at the last minute, strangely enough, again after drawing of a standard position by Julia Fedotova, I was able to score with my head.

I would like to note that the whole team played with complete dedication. We scored six points, and now we will prepare to a decisive match against the team of North Korea. It will be a battle for the gold medals of the "Kuban Spring" and a good test before the Elite round of EURO-2018, to which we are now preparing.