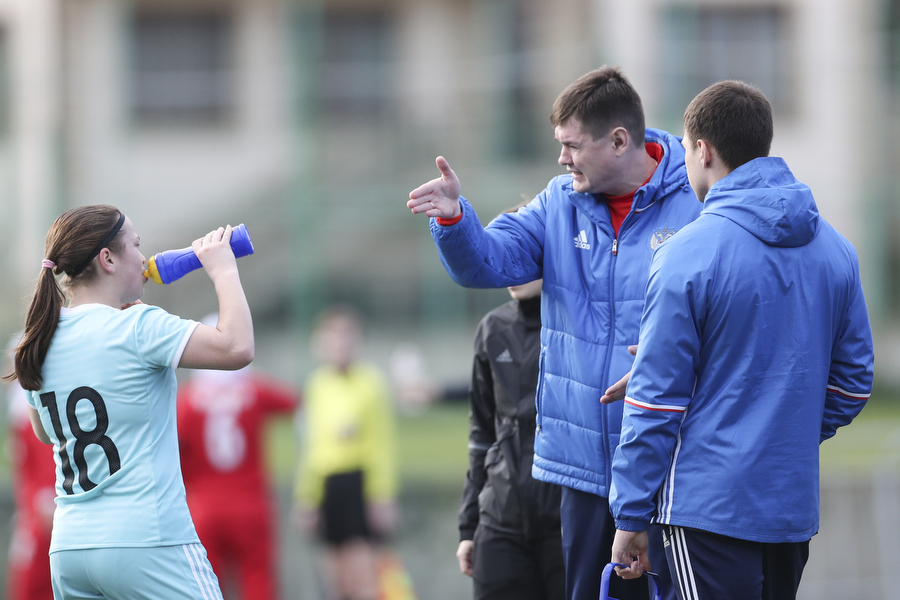 The head coach of the women's youth team of Russia Roman Ezopov commented on the results of the opening match of the European Championship-2018 U-19 Elite round in Edinburgh, where our team lost to Italy with a score of 1:7.

Roman Ezopov, the head coach of the Russian national team:

– The Italians have offered today such speeds, which turned out to be cosmic for us. Due to this we failed. In addition, the game discipline let us down. Thus the defeat has become inevitable. Unfortunately, it is hard to compensate for what I said above with dedication. This is the main reason why we lost in the match with the Italians, if not to take into account some kind of evil fate that persecutes us. In each match we lose several players because of injuries. During this meeting, Polina Organova and Veronika Kuropatkina were injured. In addition, our captain Victoria Dubova got an injury. But we will analyze our game, adjust to the following matches. We will try to prevent the repeating of such a situation in the meetings with the Czech Republic and Scotland, add discipline to the game. There will be no problems with the team’s dedication – in this matter the coaching staff has no claims.

– In preparation for the control round, you analyzed the game of the Italian team. Did it manage to surprise you?

– It should be noted that in the 1st qualifying round of the European Championship-2018 the Italian team acted a little differently. Although what they’ve showed in the match against us – also took place last autumn. At the first stage of qualification, the Italians made a lot of long diagonal passes to the flanks. Today they did not do them, but mostly demonstrated low, combined game. We knew that they could play that way, had informed our girls. But again I will return to the fact that the speed of the opponent and the problems with the game discipline led us to such a result.

– You were present at another match of the group, in which the Czech Republic defeated Scotland (2:1). What impressions did you make of our second opponent – the Czech team?

– The Czech national is a very strong, technically organized, well-equipped team. Like Italy, it tries to control the ball, the course of the game. The Czech team has very impressive players who win a lot of competitions. This is a very strong, difficult rival, and we knew it before. And a match with the Scots has confirmed it.

– Is it possible to name Andreya Stashkova, who scores in each match of this tournament, the leader of the Czechs?  Will you draw the attention of your players to her in preparation for the game?

– Yes, this girl is playing at the position of the central striker. She really stands out in the Czech team. The same can be said about the player with number 10, who is the captain of the team (Kamila Dubtsova .-– note). She plays at the place of insider. It is through this "ten" the Czech game is largely built, she leads it. Of course, we will draw our players' attention to these two girls, although in general the Czech team is very balanced.