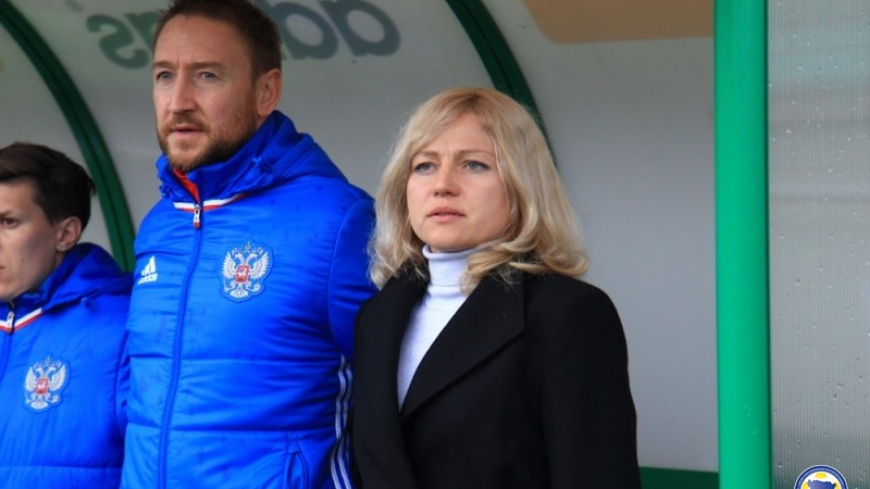 Showed the inner core and broke the course of the game

On Thursday, April 5, the women's national team of Russia defeated the team of Bosnia and Herzegovina (6: 1) in the qualifying match of the World Cup 2019.The head coach of the Russian national team Elena Fomina commented on the results of the meeting special for the FUR official website.

– We were studying the team of Bosnia and Herzegovina for a long time, watching their matches with Wales, England, Kazakhstan, imaging what Bosniacs can offer us; as a result, our expectations were generally justified. In their line-up there are interesting football players, the team acted well in fast attacks, compactly played in defense, came into pressure. We conducted two theories devoted to Bosnia, fixed the material, and prepared our players for the game with this team. They absorbed the information well, tried to act competently, and it gave the results. It was good that the girls found the strength and motivation after a missed goal. They showed the inner core and broke the course of the match.

– We were ready that the Bosniacs would try to implement standard positions. We worked out the standards, realizing that it is our best card. But I can say that in this match, they won almost the entire dog fight at our passes. What we hoped for didn’t work out: Kozhnikova and Belomytceva were completely closed at penalties; they did not have an opportunity to tackle the ball. However, other schemes worked. It was nice to see how the combinations having played during the trainings resulted in scored goals. It happened due to the fact that the players had been charged for the result. We managed to place the players on the positions, so that they could show their strong points, no one dropped out of the game. At the dog fight there was the implementation of moments, which sometimes let us down. All these details helped us to play better than in previous matches. By the way, after the match with China at the Algarve Cup I said that if the players kept that spirit in a month, they would surely beat Bosnia. It seems to me, the girls did it. On a heavy field in the rain, losing 0:1, the team got angry and defeated the opponent.

– Honestly, neither before the match, nor during it there was no question about the score gap. Already during the game the players caught courage, squeezed out a maximum. Of course, a big score is in our favor: when comparing the results among all groups, the goal difference is one of the key marks. But in order to qualify for play-offs, we need to win in other matches and overtake Wales.

– To play at your birthday is a special responsibility. In the morning, the girls congratulated me and promised to win. Such a victory is the best gift for the latest few years. I understand the price of this match and I am very grateful to all players. It was pleasant to see that all the odd players were also eager to fight, ready to go on the field, living this match.

About a coming match:

– Now all thoughts about the coming fight with Kazakhstan. We will analyze the game with Bosnia and Herzegovina, we will try to improve what we have worked out, eliminate negative moments. We perfectly understand that to if Bosnia had showed it best, we could have been punished. Therefore, there is no euphoria; there is a desire to finish a difficult tournament by a victory over Kazakhstan. I hope we did not score all our balls the day before and something left for the upcoming rival.