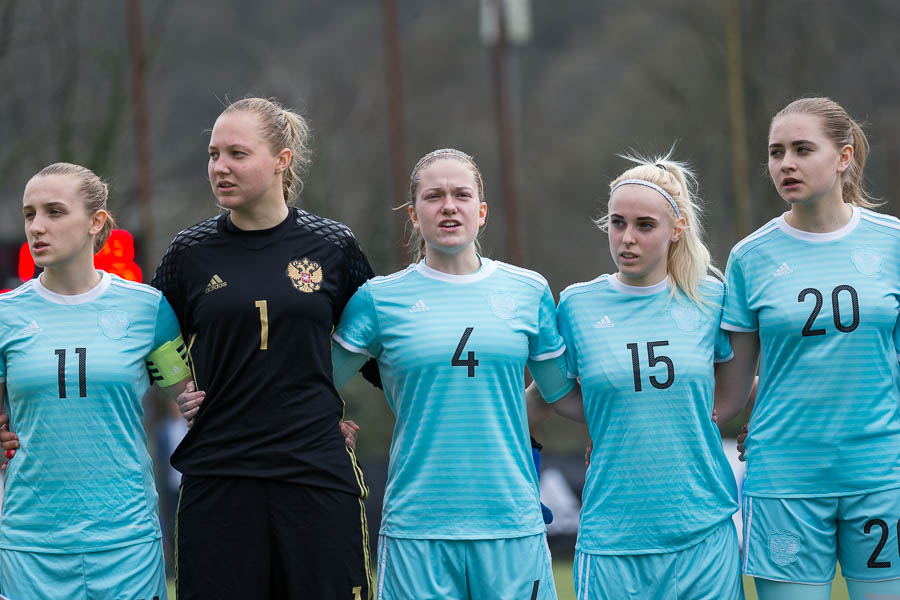 All 90 minutes of the game were not easy

A goalkeeper of the women's youth national team of Russia Natalia Stanovova shared her impressions of the match with Scotland (0: 0) within the third round of the Elite round mini-tournament of the European Championship 2018 U-19 in Edinburgh.

Natalia Stanovova, the goalkeeper of the Russian national team:

I played against the national team of Scotland for the first time. Throughout the game, the opponent showed a fast football. The Scottish team is very fast in a technical and tactical way, which is difficult to resist. This is a good, disciplined team, sufficiently compact and competently operate in lines. The Britons play to the end, which speaks about their fighting qualities. Several times today I fended off very dangerous passes performed by Scottish players. I can’t point out any of these moments. I can say that all the 90 minutes of the game were not easy.

Both today and in previous matches, the team showed a real fight on the field. But we must admit that at the moment it's hard for us to compete equally with such fast, well-equipped teams as the Czech and Italian teams. Also it should be noted that our performance in the Elite round of the European Championship-2018 was influenced by the losses of the leading players due to injuries, which slightly broke the girls. Of course, we are very upset that we could not solve the tasks set before us, did not make it to the final part of the EURO. We could perform more successfully, but, unfortunately, this mini-tournament in Edinburgh was not successful. We will analyze our game and try to avoid mistakes in future.

Команды
Win over Bulgaria
Lost to Netherlands
Draw against Iceland
Турниры
Draw against Scotland
The same story repeated with the Czechs as with Italians
Lost to Czech Republic
Section:
National teams - Women's
Tags:
Women U19 Natalia Stanovova European W U19 Championship 2018
Football Union of Russia
Joint Statement by the Football Union of Russia (FUR) and the Ru
Cooperation agreement between FUR and Coca-Cola in Russia
FUR staff appointments
Cooperation agreement between OAO RZHD and FUR
Gazprombank is FUR and the Russian team’s official bank
"Silver button" of the Russian Football Team’s Youtube-channel
FUR became a nominee of “Sport and Russia 2019” award