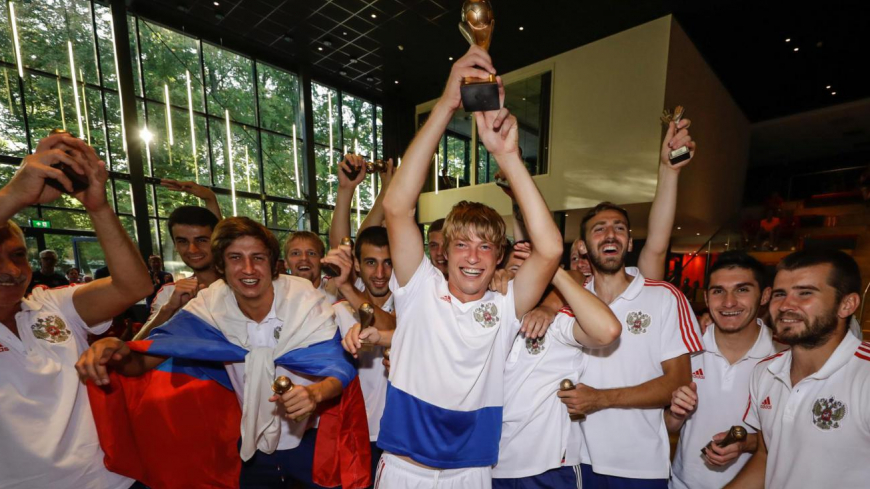 The CP Euro (7x7) took place in the Netherlands. Russia v Ukraine match for the title of European champion ended with the victory of the Russians with a score of 3:2.

All three goals scored by the Russian team belong to Alexey Bor'kin (at the 23rd, 30th and 62nd minutes). The Ukrainians Taras Dulko and Sergey Bedenok scored at 25-th and 31-st minute respectively.

The national team of Ireland got the bronze medals, having defeated the Netherlands with the score 2:1.

The Champions of Europe are:

The head coach of the national team, Honored coach of Russia Avtandil Baramidze.

The government telegram with congratulations to the athletes and coaches was sent by the Minister of Sports of the Russian Federation Pavel Kolobkov. It says, in particular:

"Dear friends, on behalf of the Ministry of Sport of the Russian Federation and my own behalf, I congratulate the athletes and coaches of the Russian national CP football team with the victory at the CP European Championship! You demonstrated a bright, selfless and harmonious game without conceding a single match of the tournament. I am sure that the Russian team will continue to please their fans with victories at the high-level competitions. I wish you all new great achievements glorifying the Russian sport! Pavel Kolobkov."

CP football (also known as 7x7 football) is a variation of football for disabled athletes with CP disease or other neurological diseases. The sport is recognized by the International Football Federation (FIFA); from 1984 to 2016 became a part of the Paralympic Games program. Competitions are held on a field of 75x55 meters; the gate is 5 meters wide, 2 meters high. A match consists of two halves of 30 minutes each.

The source: Press Service of the Russian Paralympic Committee.

Остальные
FUR together with CAFE held an inspection of stadiums
FUR is CAFE awardee
FUR organizes visual description for the sightless
Category:
Among disabilities
Tags:
Football Union of Russia
Deepest condolences
Aleksandr Dyukov met ADFC members
FUR will conduct an away registration of marriage at a match aga
Volkswagen is official car of Russian national football team
FUR is in the UEFA committees and panels
FUR seminar was held in Moscow
Grassroots football Day in Russia
Tweets by rfsruofficial