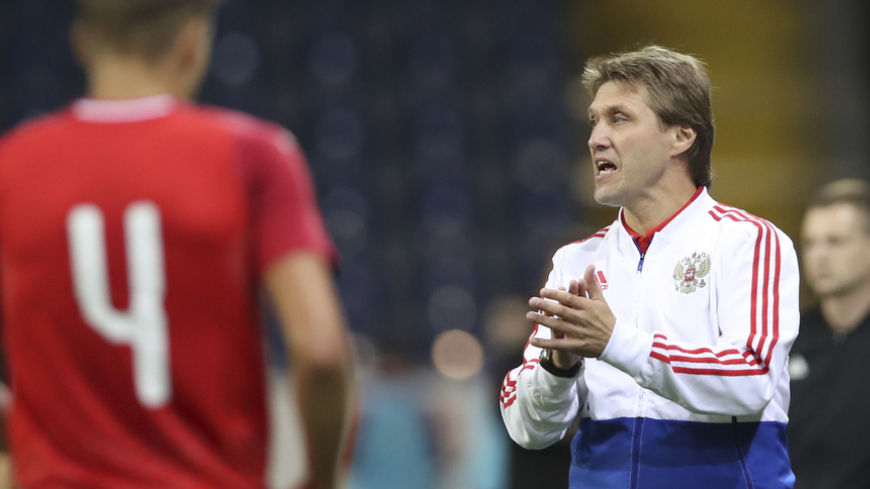 "Lots of guys may grow to National team"

After the end of a qualifying match of UEFA UERO 2019 U-21 against Austria in Sankt Polten (2:3) head coach of the youth team of Russia Evgeny Bushmanov shared his opinion about the game and summed up the qualifying round for our team. Recall that Russian youth team took the third place in the seventh qualifying group and didn’t manage to make it to the final of the continental championship.

-We were aware of the fact the Austrian team is strong, and during the match there would be fighting and pressure on our gates. That’s why we set following tasks in front of the players: first of all, not to roll over, secondly, due to own game try to get the ball down, to control it, through a quick play shift from defense to attack creating dangerous moments at the rival’s gates and score. We succeeded it partially, in particular episodes, but in the whole we must admit that the Austrians overplayed us. The team showed the character, regained twice. But the mistakes we made in defense led to the final result.

- How can you assess the results of the qualifying round for our team?

-It is obvious that we didn’t fulfill the main task - didn’t reach the final of UEFA EURO 2019. So, the result for us is unsatisfactory. We counted on another outcome.  However, at the qualification draw we understood that Austria and Serbia had more advantages, just if you look at the ranking. Nevertheless, we tried and targeted the guys on the fight and victory. We were close to that aim; we were keeping the chances to struggle for the exit to the final up to the end. As we found out later, even a draw with Austria could be enough for us to exit to playoff. So we lacked only one scored ball or one not missed.

-Did you like working with the current line-up of the youth team?

- I would like to thank the guys, because during all this period of a year and a half they worked hard in the team, did their best. Not everything was smooth in the game, but I’m content with their attitude toward their work. I think every player who was a part of the team more or less constantly, made a great leap in his career. That is why many players now play constantly for their clubs of the Russian Premier League, take leading positions there. This fact certainly makes me glad and testifies that our work in the team also helped the guys. I would like to wish them success and professional growth in future. I will watch them anyway. I wish them all the best and the main thing is never to stop.

-In your opinion do many players of the current youth team have a potential to grow eventually to the national team?

- I think a lot of them. We made up rather wide list of candidates to the youth team of Russia. During this year and a half the team has been renewing step by step; we were open, carefully watched the players who excelled. A potential capacity to develop and grow in future became one the most important our requirements in choosing right candidates. I believe that a bunch of guys from the youth team are potential players of the national team of Russia.