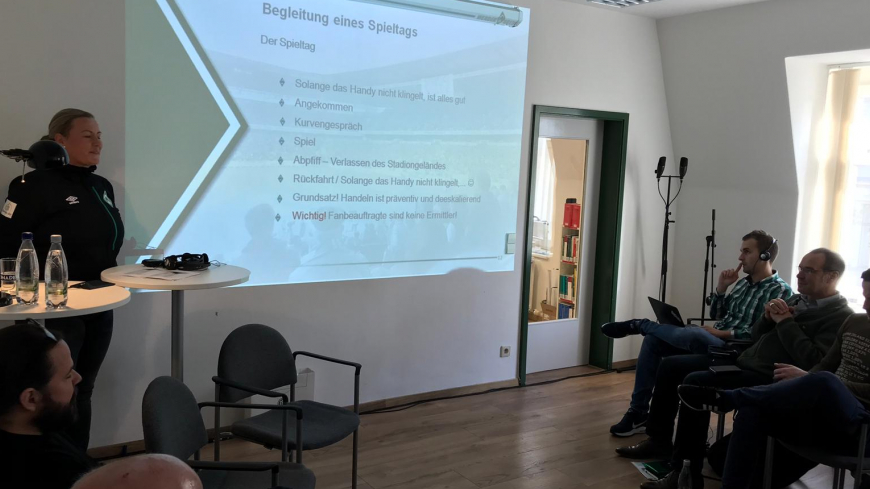 On Thursday, November 15, on the eve of the control matches of the National teams, the second seminar on development of interaction with football fans of Russia and Germany took place in a fan-project place in Leipzig. Leadership of the Football Union of Russia: Acting President Aleksandr Alaev, Deputy Chief Executive on Foreign Affairs Ekaterina Fedyshina, Director on Regional Policy and Foreign Affairs Alexey Smertin and other representatives of the organization as well as fan work employees of the leading Russian clubs were present at the meeting. DFB President Reinhard Grindel represented the host country.

During the seminar representatives of the football associations shared their experience of fans visiting of the World Cup in Russia. The participants expressed their opinions and visions of how the abovementioned tournament was organized from the point of view of fans behavior. Certain offers, which should be taken into consideration during preparation to such large-scale competitions as UEFA UERO 2020 and 2024, were formulated.

Security of mass events organization, development of dialogue with fans and creating of comfortable conditions of their staying during tournaments became the key aspects. The major part was dedicated to the matter of fans activities: fan marches, choreography at the stands, pyrotechnics at stadiums and outside.

FUR Security and Fan Work Committee member Elena Yerkina summed up the work of fan-embassies of different countries in variety of Russian cities during the World Cup.

The second part of the seminar was dedicated to certain practices of the fan work on the national and club levels. Specialists from Russia and Germany exchanged their experience. For example, Julia Duvelsdorf told about fan work in FC Verder. Besides, a system of social football program in Germany with its realization was introduced. The representatives of the Russian clubs, in their turn, shared their experience on interaction with fans.  Ivan Kuznecov (FC Lokomotiv) and Evgeny Shchegolev (FC Dynamo) made reports.

-The seminar on fan work not just had an interesting content but was very practical too. German clubs are leaders in the world in the area of cooperation with fans. At the same time the experience of Russian specialists after such a grand event as the World Cup is very timely and important too. The seminar turned out to be very fruitful and useful for all the participants.