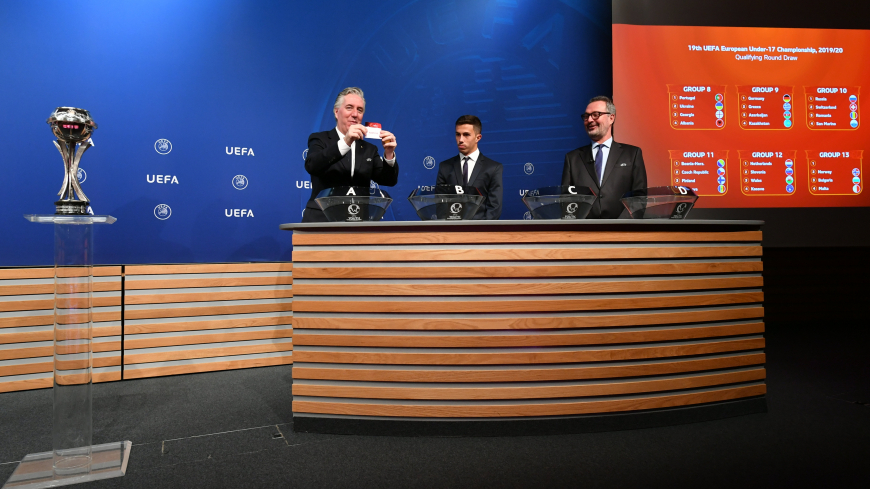 Opponents of youth teams were defined in Nyon

On Thursday, December 6, a draw of UEFA UERO-2019 Elite rounds and first qualifying rounds of UEFA EURO-2020 U-17 and U-19 took place in UEFA headquarters in Nyon, Switzerland.

Group 1. Ireland. RUSSIA (the hostess of the mini-tournament). Azerbaijan. Romania.

28 teams will participate in the Elite round of the qualification: winners from each group will exit to the final.

8 teams including the host of the mini-tournament Armenia will play in the final of Euro-2019 on July 14-27.

– e’ve got rather equal group. We know somehow each of the opponents. Romania and Ireland have quite organized teams. The Irish confidently won in their group in the first qualifying round and today found themselves in the first pot. That’s why Ireland must be considered a team of European level.  We held friendly matches with Azerbaijan this year, and I talked to the coaching staff of this team. Many Europeans work in their football system now; junior teams make quick progress and work for the national team. The fact, that they managed to reach the Elite round, tells a lot. All matches are going to be rough, but all the teams have a chance to move on. We will start to analyze the rivals soon.

It is great the matches of the Elite round will take place in Russia; we count on the warm support of our fans. I think that the draw has turned out to be good: our level allows us to leave the group. We will work on that.

16 teams (8 winners and 7 best teams at the second places) will take part in the final of EURO-2019 U-17, including the hostess of the tournament Ireland.

-We’ve got strong rivals in the group. We know the teams of Portugal and Scotland. Portugal, for example, won a respectable “Montague” tournament in France, where we performed as well.  It proves the level of this team. We held two sparring matches with Scotland during the training camp in Spain and lost both times. There is no information yet about the team of Poland, but we will start to compile it.

We have very difficult group, besides the Elite round is going to be held in Scotland. In due time we played in the Elite round of UEFA EURO-2013 U-17 in England at the same period and there were lots of problems, caused by the weather – strong wind, snow. Scotland is even further north than England, that’s why it is probably going to be very wet during the Elite round.

Matches of the first qualifying round of UEFA EURO-2020 with the participation of the Russian team will take place on November 13, 16 and 19 in Wales.

28 teams will participate in the Elite round of the qualification: the first two places in each of 13 groups, one best team of the third place and Portugal freed from the first qualifying round according to UEFA rankings.

In the EURO-2020 finals 8 teams are going to compete, including the hostess of the tournament Northern Ireland.

-When the line-up of our group has become known we suggested that the Wales could host the mini-tournament. We’ve got an equal group with good opponents. I don’t see any reason to point somebody out. We set a task to exit to the Elite round of UEFA EURO-2020 U-19.

We haven’t met the teams of Poland, Wales and Kosovo before, but the coaching staff will find all the possible information about the opponents and analyze it. We are going to prepare for the tournament in Wales very well. Two best teams from each group will exit to the Elite round and one best team at the third place, but we are aimed to be the first. Our team defends honor of the country and always is focused on the victory.

32 teams will participate in the Elite round of the qualification: first two places from each of 13 groups, four best teams of the third places, as well as Spain and England, freed from the first qualifying round as leaders of the relevant UEFA ranking.

16 teams including the host of the tournament Estonia will take part in the final of EURO-2020.

-We’ve got a very strong and tense group for the first qualifying round of EURO. Besides, the tournament will be held in Romania, which will become an additional motivation for the host team. Not an easy struggle waits for us; we are going to prepare to the round full armed. Our team in the nearest future has plans to perform at the Aegean Sea Cup in January, where we are going face Spain, Macedonia and Albania.

We have met Romania before, so we have a clue of this team. Moreover, we have to meet it one more time at the UEFA Development Cup in April 2019 in Romania. We don’t have any information about the team of Switzerland yet, it is a dark horse for us at the moment. However, there is an understanding that their national team plays at a very good level; and the youth team’s play most probably more or less corresponds to it. We are going to compile information about it. As for San-Marino, it is not so scary in comparison to Switzerland and Romania.