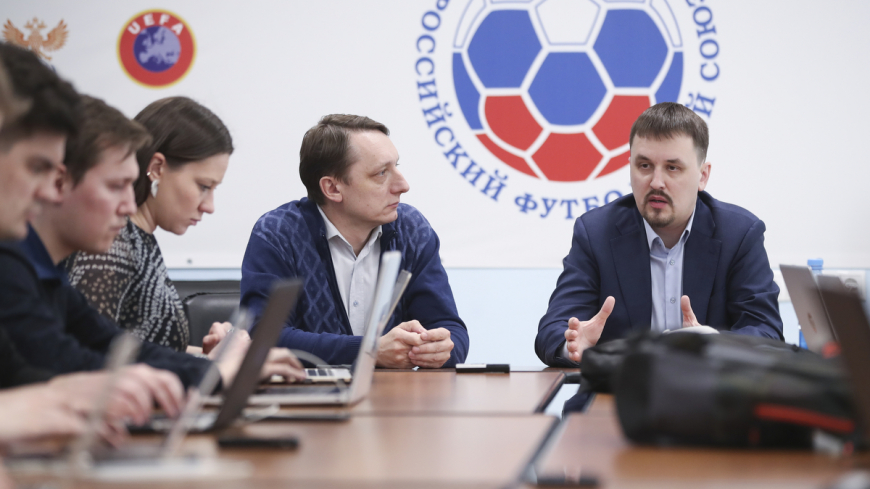 "I am glad with the first experience of using VAR"

On Thursday, April 4, a press-conference with participation of a specialist on VAR implementation in Russia Leonid Kaloshin was held in the House of Football, where he answered journalists’ questions.

-Please, share your impressions from the first usage of VAR in Russian football.

-We consider the start of using VAR as a beginning of a new stage in Russian football. As I already said, back on Tuesday the chances of using video assistants of referees were 50/50. Fortunately, FIFA and IFAB agreed and already yesterday we worked in combat conditions. I must stress that yesterday’s meetings shouldn’t be considered as test ones. These were official games, where a fate of the teams was determined. There were lots of difficulties; we were solving them all throughout the day. The fact, that both matches took place at the same day, created additional problems.

In the whole, taking into consideration human resources, work of video assistances, operators, technical specialists, communication between referees, I’m very glad. There were no any global aim for matches after receiving permission to use VAR; we just wanted to launch the system and prepare everything in time. Yesterday we worked rather smoothly. It is good that we have enough time before semifinal matches of OLYMP Russian Cup. Naturally, we will go on preparing.

-At the first semifinals of the Russian Cup there were two episodes, where VAR really influenced the game. Did referees discuss other episodes, to which fans and journalists didn’t pay attention?

-Video assistants check the moments within 4 categories. Everything related to goals, penalties, red cards and help with identification of a player, received a warning. Yesterday the video assistants twice recommended referees to rewind certain moments, because on their opinion, the referees made mistakes, haven’t shown a red card in Yekaterinburg and a penalty in Moscow. Upon these results correct decisions were made.

-Will be VAR used at the return matches of ½ Russian Cup final?

-We plan that it will happen not only at these meetings, but also at the final of the Russian Cup and transit matches between RPL and FNL. We prepare an inquiry to each particular match; there is an application that should be filled. There’s no sense to inquire right now, as soon as many aspects are still unknown.

-Did you manage to talk to referees working at yesterday’s matches?

-Yesterday I was at Lokomotiv - Rostov match and talked to the guys before and after it. As for the video assistants - I managed to talk to them even during the break. Today I talked to the main referee of the game Ural - Arsenal.

The most experienced referee at the VAR system in Russia is Sergey Karasyov, because he was preparing for the World Cup 2018 for a long time.  FIFA held seminars regularly, but he obtained a license as a field referee, not a video assistant. However, all the procedure stuff he acquired long before the start of an intensive preparation work for introducing the VAR system in Russia. Even he was a little bit nervous yesterday, but everyone coped with the tasks decently.

-It seemed that Levnikov was reviewing the penalty episode too long, don’t you think?

-Yes. It took much time; that is the thing we will correct. But I don’t think it is going to be very difficult. Yesterday we used the VAR for the first time in combat mode, so at the moment we should make allowance to the referees. I hope that this problem is the only one left to solve.

-Do the video assistants have a time limit for making decisions?

-There are no such regulations. Accuracy is much more important than the time spent. Here a lot depends on a person’s character. There are energetic people capable to make quick decisions and there are more reasonable ones. It is good that yesterday the referees and assistants didn’t give in to temptation to make something quicker in prejudice of accuracy. Let this process be a little bit slow at the beginning.

-Is it possible to invite journalists to watch the work of VAR-referees in a special room during a match?

-Is it possible to let journalists seat on a dug-out or to come out to the field together with the footballers? There are strict regulations with a list of people having access to a room or booth and authorized entry only.

- In Holland video reviews are shown on big screens at the stadiums. Will it be like that in Russia?

-It is necessary to receive authorization of organizations conducting the competitions. If someone turns to us with this initiative, we will think it over. Showing such moments at the stadium can cause unrests, which can be difficult for the police and security service to cope with; while the worst thing that can happen at home is that one can break the TV.

-35 cameras assisting the referees were used at the World Cup, and to what amount do we long for now?

-Indeed, there were 35 cameras at the World Cup. 33 of those were the broadcaster cameras, and 2 others - the ones that FIFA asked to install for fixing offside; they were located between penalty area line and the center of the field. By the way, those two cameras were used at all the 64 matches, but none of them came in handy from the point of view of a decision to review a certain moment. If a shot from this camera was needed to the television, it would be shown to the audience at once. 35 is a total number of cameras. We are mostly interested in the number of cameras, pointed at the field. We eliminate those filming coaches and audience during the whole game. I can’t remember right now the amount of cameras used at the first semifinals of the OLYMP Russian Cup, but it’s not more than 12.

-Will this number remain the same?

-No, the thing is that a broadcaster makes its own plan for each match - that is its’ prerogative. Then we plan to communicate with them on the matter of cameras disposition.  It is as important as the quality of a picture and work of a camera-man.  They will choose cameras location at each particular stadium. We count on 4 cameras at the moment: a central, a zooming and two offside ones.

-VAR system puts certain financial obligations upon the clubs. What was their reaction to this innovation with respect to the fact they have different financial possibilities?

-Talking about those nine games we’ve already mentioned (semifinals and the final match of the Russian Cup as well as play-offs), the financial burden falls on the shoulders of the FUR. As for the RPL meetings, clubs have an option: it’s possible to make everything quick and qualitative, but it definitely will be expensive, or to make it cheap and quick, but it won’t have a good quality.

VAR is a global project, unique and innovative in the history of football. This is not only refereeing and preparation of assistants, but also technologies, stadium facilities, interaction with television. As you understand, everything costs a lot of money. Each of these characteristics requires special discussion on the possibility of reducing expenses.

-There is information that approximate cost of using VAR system at one stadium is almost 100 thousand euro a year. Tell us, please, how exact this sum is.

-Let’s specify it at once - we deal with the VAR, not with stadiums. The VAR includes a centralized room, as it was during the World Cup or as it is at the Spanish Championship. But there is another model, which we use now - decentralized method, when the equipment is located either in a track or in a special room at the stadium. This is not about a club buying the equipment and gluing it on somewhere at a stadium. It isn’t profitable to rent or buy VAR system for 15 matches only. It’s just a certain sum of money, which a technical provider will ask for a certain game.

-Why do many clubs think that the first year of using the VAR system will be too expensive?

The majority of clubs representatives advanced this idea at the common meeting.  The sum is really big. But it is important to think this issue through to understand why. We made a presentation trying to convey this idea to the clubs. But there is a list of peculiarities, which commercial and financial specialists understand better. We need to talk to experts from different areas.

If VAR comes, it is not only for two or three years, it’s forever. Maybe someone doesn’t like it but one subjective evaluation doesn’t mean anything. To build something you should first pour cash into it. Talking about the decentralized method for the first season it of course will be cheaper than the centralized one. But if we consider a time period at least five years, it’s obvious that the second method will be cheaper. Sooner or later we will have to do it. Every country longs to create a centralized VAR-room. But I must specify that the notion “VAR-room” is not one room but it’s a unit with several sections.

-Who and how is going to pay for VAR implementation?

-First of all we should agree which one of the two methods we will choose. The first one, as I already mentioned, requires a lot of investments at the first stage, but will be more profitable in the long run. Who will pay is the matter of negotiations. The letter, which was sent to FUR and RPL at the end of the last year, suggested that all the expenses should be borne by the League and clubs. But the technological part is rather wide and it is necessary here to negotiate without any emotions engaging experts from different areas to work out a method at more or less reasonable price without losses of quality.

-Does it mean that due to the lack of time the decentralized method will be realized next season?

-I didn’t say that next season it certainly will be realized. It is still the question of negotiations.

-Is there a deadline for such a decision?

-There is no deadline, but of course this decision has to be made as soon as possible.

-Are there any age restrictions for referees working with VAR?

-It can be difficult for aged specialists to master new technologies, but any candidacy is subject to discussion. There is an age limit for referees in Spain - 45 years old at the start of a season; we don’t have such a rule. Basing on international practice I can say that acting referees and those, who have just finished their career, work with VAR. However combining of two kinds of refereeing shouldn’t become a problem.

-Are there clubs which argue against the VAR system implementation?

-Grigory Ivanov does, from FC URAL which yesterday participated in the first in Russia match with VAR referring. He doesn’t hide it. He gave interviews, spoke at an RPL meeting.  But the vast majority of clubs support the VAR system. They held an opinion poll on this topic not so long and 13 clubs out of 14 were in favor of it. VAR is not just refereeing; it is also administration of competitions.  Look at the additional attention to the Russian Cup yesterday. That is the question of increasing the spectacularity and importance of the tournament. Here you are - nobody paid attention to a shifted RPL match, which was held yesterday as well.

Турниры
Samara is ready for the final. FUR TV
Let’s go to the final! FUR TV
Show at the final of the Russian Cup
Category:
Men
Tags:
Olimp Russian Cup 2018/19
Football Union of Russia
Deepest condolences
Aleksandr Dyukov met ADFC members
FUR will conduct an away registration of marriage at a match aga
Volkswagen is official car of Russian national football team
FUR is in the UEFA committees and panels
FUR seminar was held in Moscow
Grassroots football Day in Russia
Tweets by rfsruofficial