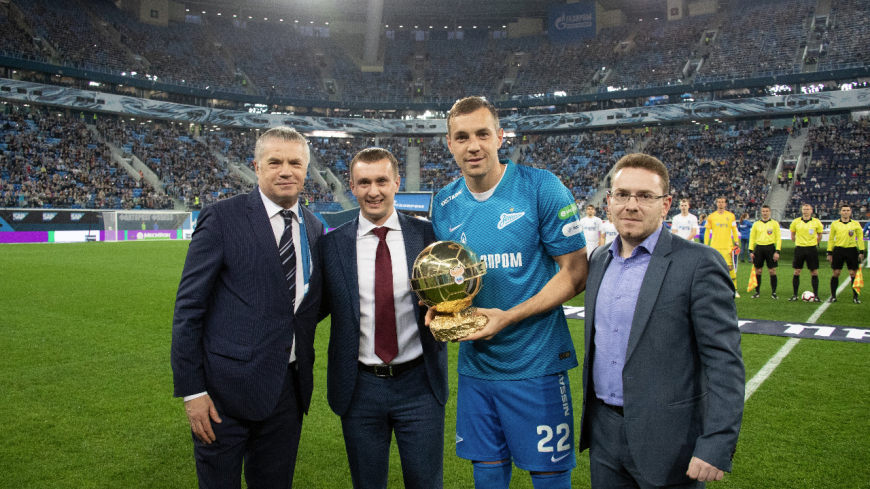 On Wednesday, April 24, forward of FC Zenit and National team of Russia received award “Best footballer of Russia” in 2018. The winner is defined by voting, held by the Football Union of Russia and a leading sports edition of the country “Sport-Express” among coaches, football managers, journalists and fans.

The award was given at Gazprom Arena before a meeting of the 25-th tour of RPL, in which the club from Saint-Petersburg hosts FC Dynamo (Moscow). FUR Chief Executive Aleksandr Alaev, Deputy Chairman of the Board of NOVATEK Company, Chairman of FUR marketing committee Denis Solovyov, Chief Editor of “Sport-Express” Maxim Maximov and President-General Director of FC Zenit Aleksandr Medvedev took part in the awarding ceremony.

Upon the results of the voting Dzyuba outpaced the previous captain of the national team - CSKA goalkeeper Igor Akinfeyev. The forward became the first in all four groups of voters. Besides Dzyuba and Akinfeyev, Mario Fernandez (3), Roman Zobnin (4) and Denis Cheryshev (5) got into the final list of the five.

The common award of the Publishing House “Sport-Express” and the Football Union of Russia is given the third year in a row. Fedor Smolov became the winner in 2016 and Quincy Promes - in 2017.

Команды
We play for you: how the team united the country. Part 2
Meeting Belgium in Saint-Petersburg
Tickets to Scotland - Russia match
Игроки
All goals of Artem Dzyuba in RPL in season 2018/2019. Video
All Dzyuba’s goal passes in RPL of the season 2018/2019. Video
Journalists chose Artem Dzyuba
Category:
Men
Section:
National teams - A-team
Tags:
Russia Artyom Dzyuba
Football Union of Russia
Deepest condolences
Aleksandr Dyukov met ADFC members
FUR will conduct an away registration of marriage at a match aga
Volkswagen is official car of Russian national football team
FUR is in the UEFA committees and panels
FUR seminar was held in Moscow
Grassroots football Day in Russia
Tweets by rfsruofficial