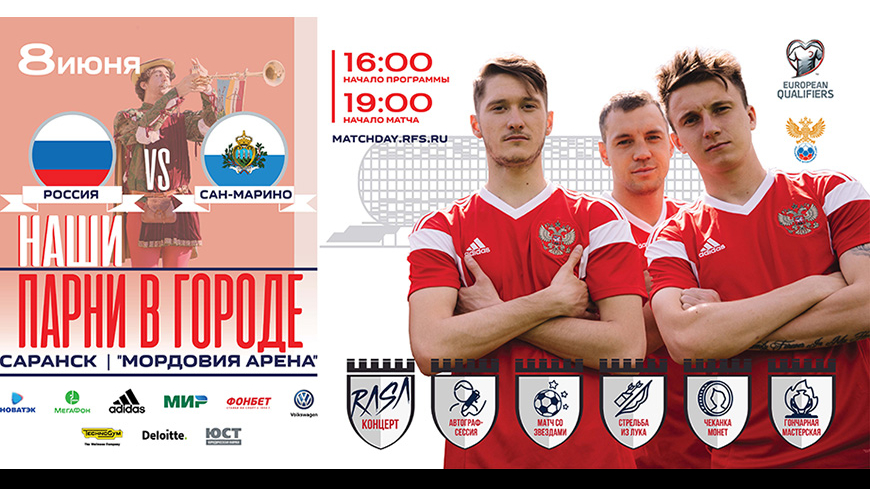 The Football Union of Russia prepares a large-scale entertaining program dedicated to qualifying matches of EURO 2020 in Saransk and Nizhniy Novgorod.

Thus hospitality and photo-zones with players of National team of Russia will be installed in the cities with support of Government of Republic of Mordovia and Government of Nizhegorodskaya region; prizes and tickets will be played; festivals with autograph-session of FUR ambassadors - Andrey Tikhonov, Alexey Smertin, Dmitry Khlestov and Ruslan Pimenov will take place at central squares.

But the most interesting things expect visitors before the matches. Three hours before the start intense entertaining program will start at the stadiums Mordovia Arena and Nizhniy Novgorod stadium. The visitors will have an opportunity to participate in concerts, try their strength against ex-footballers of the national team, test the speed of their reaction and exactness of the shoot, play in panna football and teqball, visit a barber-shop and win prizes.

The fans will also get a chance to indulge in the atmosphere of a fortress city of San-Marino and Republic of Cyprus and meet medieval knights and antique gods, try themselves in pottery and coinage, dance at the music of ancient musical instruments, see performances of street acrobats and foamy show, and try Apennine and Greek cuisine.

-Each game of National team of Russia should be a special event for a city - FUR President Aleksandr Dyukov noted. - We consistently implement our strategy of holding a matchday. At the same time holiday atmosphere for citizens and fans should be created not only on the territory of a stadium before a match, but also on a city’s space - central squares, shopping centers, public transport, as it was during FIFA World Cup 2018. I’m sure that Saransk and Nizhniy Novgorod, which hosted matches of the World Cup, will cope with this task very well. In both cities we expect a fest and sell-off.