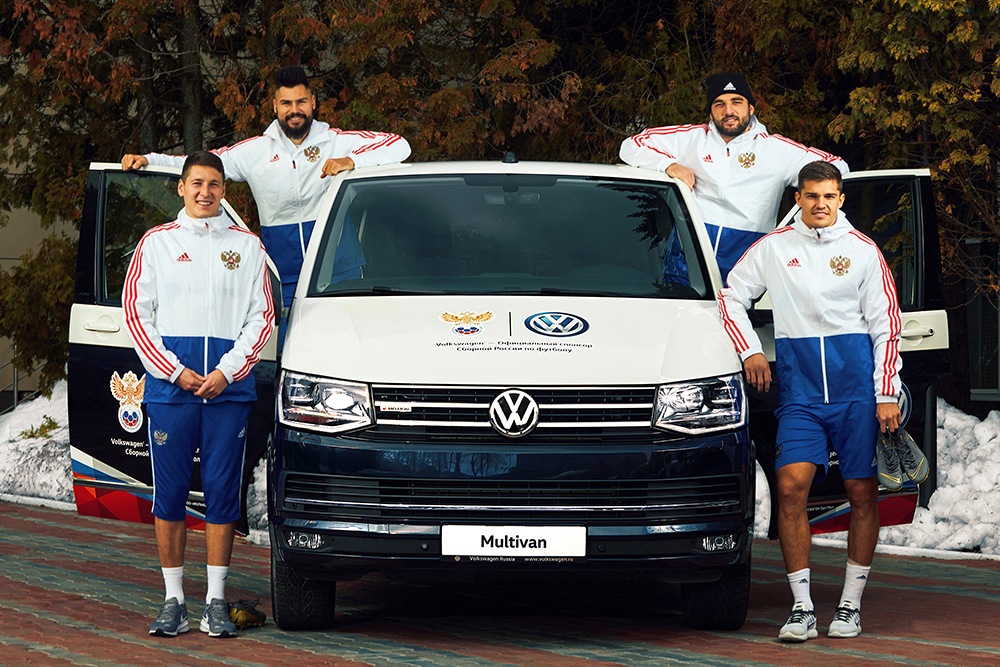 Volkswagen Passenger Motors and Volkswagen Commercial Motors announced a start of cooperation with the Football Union of Russia since June 2019. The contract between the partners is signed for 4 years. Volkswagen becomes official mobility of the Russian national team.

Volkswagen traditionally supports football in many countries of the world, and in Russia it is the most popular kind of sport. Football sponsorship of Volkswagen is a part of its large-scale campaign "Cheer for fans" under motto "Volkswagen. We charge with football". Volkswagen supports the Russian team on its way to UEFA EURO 2020.

Thomas Milts, Head of Volkswagen Passenger Motors in Russia notes: "Volkswagen supports football all over the world and our strategy in Russia "Cheer for fans" will certainly take a liking of our clients and football fans. We continue cooperation with the national team this year and it is something to be proud of. We are convinced that this synergy will increase the amount of Volkswagen lovers and draw additional attention of young, athletic goal-oriented people".

Aleksandr Dyukov, FUR President: "I’m glad to announce a new stage of cooperation between the FUR, the National football team and Volkswagen. The company’s philosophy and its strategy in Russia "Cheer for fans" appeals to us. I’m convinced that this partnership will add new impulses to development of Russian football and open new possibilities for Volkswagen".

Within this partnership the FUR will receive 10 Volkswagen vehicles, which will become official cars of the Russian team. The coaching staff of the team will get Touareg, Tiguan, Polo, Caravelle и Multivan models.

A list of sports events focused on popularization of football in the country is planned to be realized together with the Football Union of Russia. These are events for fans, master-classes of famous footballers for children, youth championship Volkswagen Junior Masters, creation of fan-zones in official dealership centers of the brand, contests and special test-drives etc.

Interesting facts about Volkswagen and football:

In 2018 Volkswagen and Federation of Computer sport in Russia announced the start of cooperation. Volkswagen became a partner of grand-final of Russian championship on interactive football, which is always held by the Football Union of Russia together with Federation of computer sport in Russia. Russian Championship on interactive football is the first official championship country in FIFA 18. Volkswagen created a zone at the Championship, where fans got an opportunity to play digital kicker.