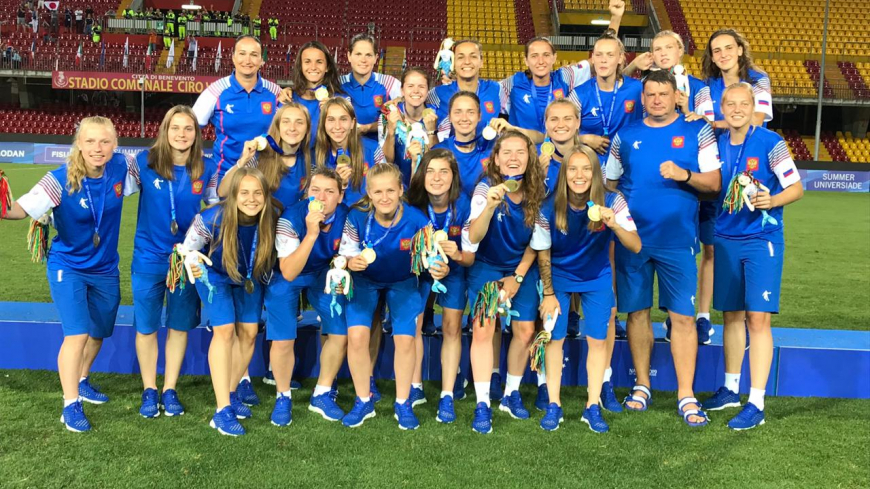 The Football Union of Russia congratulates the girls, coaching and administrative staff of the women’s students team of Russia on the "bronze" of International Universiade!

- The match for the third place went not according to our plan. We missed two unnecessary goals and were ready to any turn of events and understood that the team of Ireland had held two previous matches (against China and North Korea), using different schemes, ways of development of attack. Executers of high quality dead ball situation were in its line-up. But today we were one team! We understood very well that a lot would depend on those, who would substitute, because it was too hard to conduct 5 matches in 10 days, everybody has got tired. That is why the substituted players were aware of al the importance and managed to strengthen the game. I’m happy for the girls, that they showed their best qualities and could change the course of the game, score two important balls and even the score. Moreover, we had moments to go ahead.

Penalty is always a lottery. Once again thanks to irresistible hops of Tatiana Shcherbak and accuracy of our field players we turned out to be stronger, having obtained bronze medals of International Universiade in Italy. I would like to thank coaching, medical and administrative staff of our team. We were one body! Acted properly, in a coordinated manner. The girls showed their best qualities and proved their competitiveness on international level. Here in Italy we had one of the youngest in respect of age and experience team and this speaks for the potential of the players, who performed in these competitions.

I would like to note as well that International Universade is a wonderful tournament! It is a real holiday of studentship. Our girls are university students. It’s an amazing period now when they combine studies with professional sport. I hope that being here will add them desire to learn harder and become real specialists in those areas, they study at their universities.

In conclusion I would like to say several words about uniting of men’s and women’s students teams of Russia at the Universiade. We are a real family ,where everybody support each other. On Saturday the guys will fight for the bronze of the Universiade too - against the team of Italy. On behalf of all our team I wish the victory to our men’s team. Tomorrow we will definitely go to the stadium to support them.