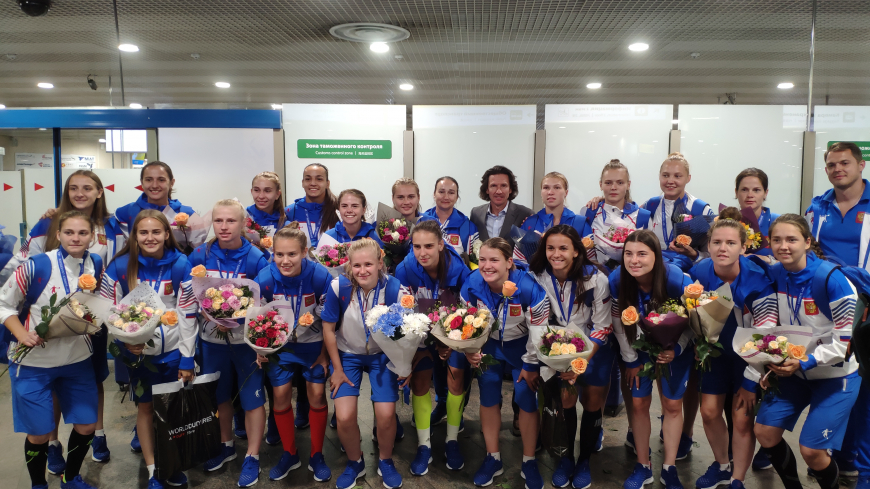 Their charter flight from Italia came with 1,5 hour delay but still our girls were warmly welcomed at the airport. Families, friends and colleagues from FC Chertanovo (Moscow) as well as representatives of media gathered to congratulate our players on their successful performance at the largest international students forum. Director on Regional Policy and Foreign Affairs Alexey Smertin presented beautiful flowers to the girls at arrival lounge on behalf of the Football Union of Russia.

The atmosphere of the meeting turned out to be very warm. Our team together with Tatiana Zayceva talked to ex-captain of the Russian team Alexey Smertin, who congratulated the girls, and then numerous interviews were given to Russian media and a memorable photo marked this meeting.

"I’m convinced that after the Universiade some of the players will definitely outshoot and prove themselves in adult women’s football. Of course, it was offensive to lose to Japanese in the semifinal, but anyway bronze medals - it is success" - Alexey Smertin noted in an interview to FUR TV.

"I’m so happy for the team, for the girls, that we could take a worthy place with such a young team in such a difficult tournament, showing beautiful football. We were one of the youngest teams in Italy, and it adds importance to our bronze medals" - Tatiana Zayceva said.

All five Universiade matches were something unbelievable, because all the games gave lots of emotions and drive" - goalkeeper of the Russian team Tatiana Shcherbak stressed.