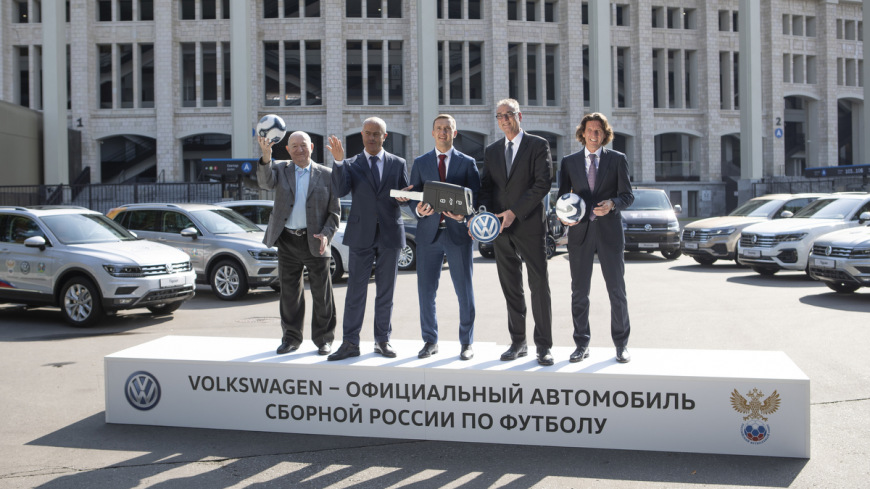 Volkswagen assigned vehicles to the FUR

Within 4-year cooperation agreement Volkswagen Passenger Motors and Volkswagen Commercial Motors assigned a vehicle park of the most popular models in Russia to the Football Union of Russia. The assigning ceremony took place at a legendary Luzhniki stadium.

10 vehicles among which are: Touareg, Tiguan, Polo, Caravelle and Multivan were conveyed for usage by the FUR.

Now the national federation has got an opportunity to use new automobile technologies. For instance, matrix-assisted LED DRL IQ.Lite, lane-change assistance system Lane-Assist, adaptive cruise-control, as well as Pre-Crash system are installed in Touareg R-Line.

Football for Russia is the most popular kind of sport, traditionally is most significant for Volkswagen. The brand supports teams all over the world within large-scale campaign under the motto "Volkswagen. Charge with football". Volkswagen will support the Russian team on the eve of UEFA EURO 2020.

Thomas Miltz, Head of Volkswagen Passenger Motors in Russia notes: "We are happy to submit our partners from the Football Union of Russia Volkswagen vehicles, representing comfort, liability, innovation and quality. We are convinced that the path of Russian footballers will be filled with bright events and emotions, and also hope that our motors will become their loyal travel companions on the way to the victory".

Aleksandr Alaev, FUR General Secretary stressed: "We are happy that Volkswagen, being a largest automobile brand and producer of many legendary models, supports the most popular sport in Russia and the national team of our country. We are sure that our partnership will bring positive results for both sides".

Besides, legendary footballers as Nikita Simonyan, First FUR Vice-President and Head of the Technical Committee and Alexey Smertin, FUR Director on Regional Policy and International Affairs, combining a post of an officer on combat against discrimination in Russian football took part in the assigning ceremony.

The Football Union of Russia together with Volkswagen plans to hold a list of sports events, directed on popularization of football in Russia: fans activity, master-classes of famous footballers for children, youth football championship Volkswagen Junior Masters, fan-zones in dealership centers of the brand, contests and special test-drives, etc.